Can Your Dealership Beat the Mystery Shopping Challenge

My company recently mystery shopped 28 dealerships around the

country. We called each dealership twice for a total of 56 calls in six

weeks, and the results were truly eye opening — so much so that I feel

First, let me explain that on our scale, the maximum opportunity — a

set the appointment, you want to be as perfect as possible.

Having said that, the top people only received a 16.75 average. That’s

right; the best of the bunch earned less than half the points possible. Are

your eyes opened yet?

Out of the 28 dealerships we could not reach two. That’s right — two

dealerships didn’t even answer the phone. Keep in mind that even though

we called all the dealerships twice, on different days, we still couldn’t

even get two stores to pick up the phone.

impression. That initial experience boils down to simple actions. How

many times did the phone ring? How many people did they go through

before getting a salesman?

We found that out of the 28 dealerships, only eight had acceptable

scores for initial experience. There were so many calls where the phone

rang off the hook. Moreover, when they finally did answer the call, it

process of transferring to the right person. And, in several instances,

after waiting on hold, being transferred and having an overall stressful

initial experience, some calls wound up going to people’s voicemails.

result. How would you feel?

While the majority was able to conduct a proper greeting, about a third

of the group struggled on the greeting, and almost everyone did a poor

job on phone etiquette; that they did not ask for the prospect’s contact

Of the 28 dealerships, 23 did not qualify the prospects other than on the

vehicle. They did not identify wants, wishes, expectations etc.

Only six of the 28 dealerships demonstrated any type of “phone

process,” and even those six struggled in the execution. For the most

part, people answered the phone and tried to answer some basic

appointment” process and there was no value being created. There were

just people answering the phones and trying to answer some questions

and “hoping” that these prospects would just show up to the dealership.

Only five percent of the dealerships evaluated attempted to build

value in themselves, the dealership or the product. The vast majority

absolutely did not “sell the appointment.”

We found that their closing were generally good, but it’s was too little,

too late because by then, the customer has not had a good experience.

The bottom line is that the phones are one of the most important,

most basic and most misused opportunities at the dealership. Every

• A strategy of inbound phone calls — Specifically, you want

to make sure that, when you are trying to sell the second most

expensive item the average American will ever purchase in their

lifetime, it is an awesome first impression and experience. You

rings, and they are capable of answering questions and satisfying

the needs of the prospect.

• A contingency plan —If your “A-Plan” doesn’t work, there needs

to be a “Plan B” in place. For example, if the phone rings more

than three times, the phone system is set up to re-route the call.

• A “road to the appointment” phone strategy — If you think

that it is important to have a “road to the sale” for the showroom,

• The ability to sell the appointment — The goal is getting the

maximum amount of appointments to show to the dealership, not

a bunch of appointments who’ll never show up. The only way to

do that is to sell the value of your organization.

• Create a “value package proposition” — You need a “why buy

from us” list, and articulate it to each and every prospect.

• A clear objective — Remember that the No. 1 goal of the phone

opportunity is to secure contact information, not make the

appointment. The appointment is secondary. Think about it; if you

show up, you’ve got nothing.

Dealers need to respect the phones. Why spend $60,000 per month (the

Internet and phones and totally blow it on the phones? It doesn’t make

sense. I advise every single dealership to evaluate the way they handle

their phone call protocol and strategy. Mystery shop your own store; you

may will be shocked at what you find.

As a matter of fact, if you would like me to mystery shop your dealership

for free, contact me and I will conduct a mystery shop, recorded and

graded, at no charge.

Sean V. Bradley is the founder and CEO of Dealer Synergy, a nationally recognized

training and consulting company in the automotive industry. He can be contacted at 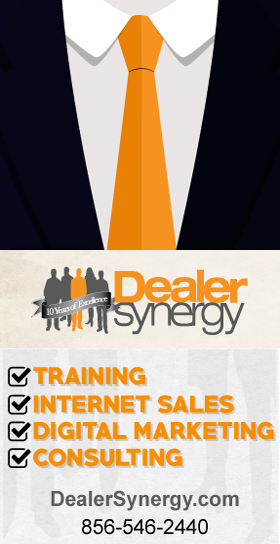