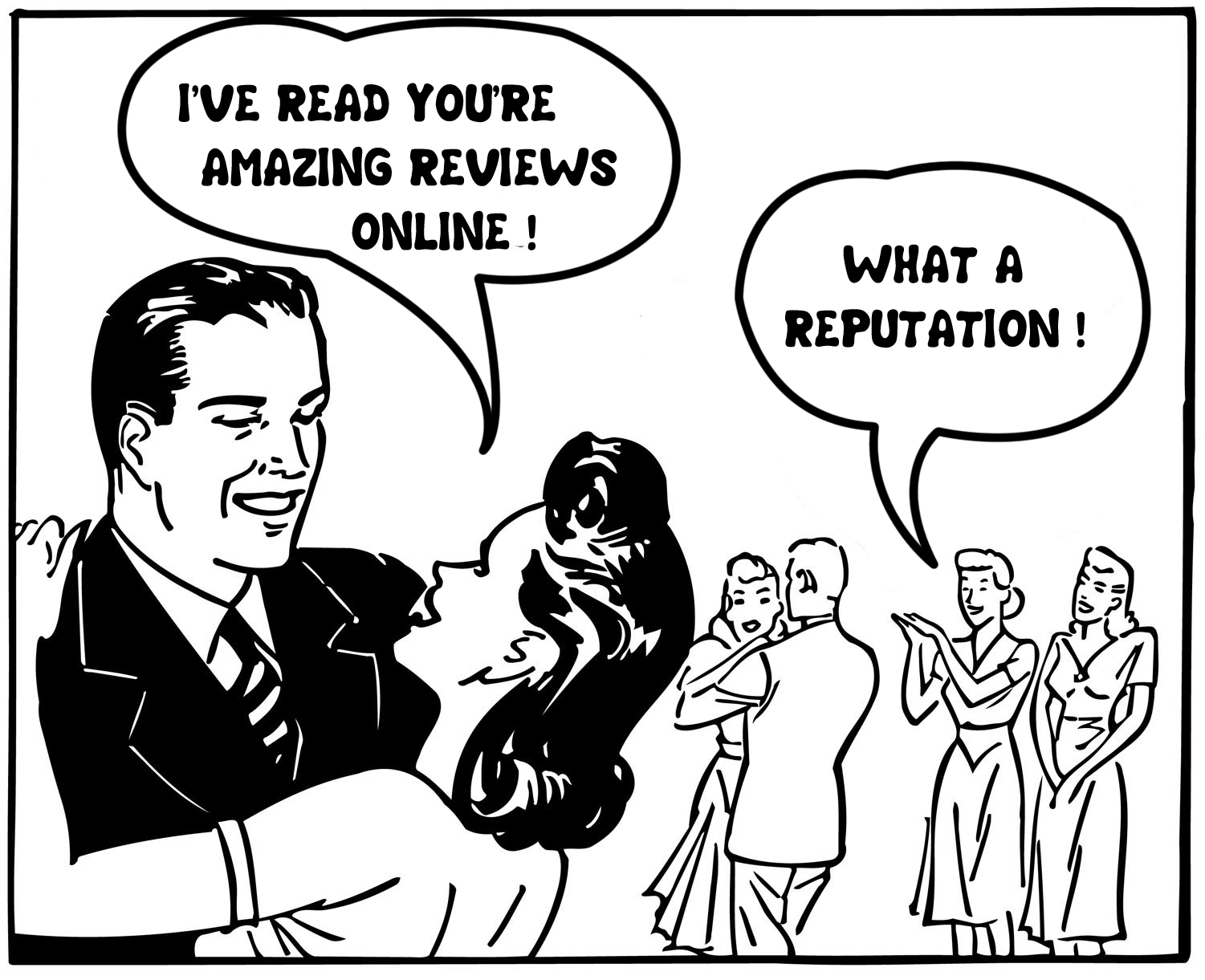 Recently I spoke at an “event” in Portland, Oregon. The room was not at capacity, however those that attended were very engaged. One of my co-workers welcomed the small workshop attendees and dived into best practices for website optimization, SEO and SEM. His down to earth approach, humor and Subject Matter Expertise shone brightly that morning in the Washington room at The Red Lion. Using common sense approaches he brought what some would consider a very high level discussion to level that was easily digestible.

After lunch I took the stage. As there were a couple executives from my place of employment there I would be lying if I said I wasn’t a little nervous. I said “amen” and dove into Reputation Management. There was great discussion from the crowd of best practices, things that worked and what to be careful not to do and who they would recommend their peers stay away from. I was then asked if I really thought if Reputation Management mattered at the end of the day. I took a different approach then I normally do this is what my response was…

One of the most influential speakers, authors and someone who changed my life, Gary Vaynerchuk has said legacy is more valuable than currency. Right now I don’t want you to think about money. Don’t think about selling a car, don’t think about servicing another truck. Think about your children and grandchildren. Think about what they will discover about you online. For the most part, what is put online will be there in some form forever. Think about what they will learn about who you were and the organization you worked for. Taking money out of the equation, what do you want your legacy to be?

I am happy to say this made some people in the room think about what their Reputation meant. What do you want to be known for?


To see what makes a good review click here

Oh and pardon my errors…I stink at typing:) If you’ve read this blog for any length of time, you know I’ve been critical of many companies for not quite “getting” social media, in some cases not even by a long shot. But I can tell you after engaging in private discussions earlier this week with General Motors Director of Social Media Mary Henige as well as a public discussion I co-hosted yesterday on Blog Talk Radio with communications strategist and author Deirdre Breakenridge, GM most definitely “gets” social media far better than most.

“It’s not magic,” said Henige. “What we do in social media is a lot of hard work, it’s engagement, it’s building relationships and that’s something that people in corporate communications and media relations are particularly skilled at doing.”

What struck me as most interesting was the willingness and ability of Henige and her counterparts in marketing to take a collaborative approach to social media rather than one based on a turf-war mentality.

What’s even more interesting to me is the nature of that collaborative relationship. Indeed, one of the most important roles of the social media team led by Henige in relation to social media appears to be that of a trusted internal social media consulting center of excellence. According to Henige, ”Because we serve as a resource to our internal…colleagues, our expertise is sought after all the time.”

Citing GM’s sponsorship of the South by Southest Conference as an example, Henige stressed that the collaboration between GM corporate communications and various departments within the divisional brands like Chevrolet have been key to GM’s success.

Interestingly the collaboration has extended beyond the marketing and PR silos to also include increased teamwork between corporate communication and customer assistance. And the results there have been equally impressive.

As an example, Henige pointed out that her team was “able to help customer service reduce their lead time from about 24 hours based on when they were online down to about 90 minutes just because we were able to filter out so much of what they were seeing.”

We asked Henige to outline some of GM’s goals for social media and she explained that while the brands that fall under the GM umbrella were primarily concerned with goals related to lead generation, customer loyalty and ultimately sales, GM corporate’s first priority for the use of social media was enhancing the corporate reputation and regaining customers’ trust in the aftermath of GM’s bankruptcy.

She stressed that listening was a key component in these efforts.

“Listening is very important…We’re there and we’re still listening. And that has [also] given us a great way to collaborate among GM employees globally.”

Selim Bingol, GM’s VP of Global Communications
GM uses SocialCast as its internal enterprise collaboration application of choice and the user adoption rate has been solid with some 27,000 employees joining the internal community hosted by the web application in a single year, according to Henige. She says GM has also begun using the Town Hall feature set that Socialcast offers which has allowed managers within GM to hold Town Hall meetings online with GM employees to further enhance internal communication.

From a strategy perspective, the March 2010 appointment of Selim Bingol as GM’s new Vice President of Global Communications appears to have had a positive impact on the significant progress GM has made on the social front. According to Henige, Bingol, who recently started blogging at a new GM blog called BTW, stressed the importance of benchmarking GM’s social performance which prompted Henige’s team to undertake a gap analysis that helped to identify areas of strength as well as areas in need of improvement.

GM’s social media benchmark approach, its marketing and communications’ employees willingness to collaborate rather than compete internally, and its efforts to ensure that the GM story is communicated clearly, may together help to explain the company’s significantly improved reputation.

The recently released 2012 Harris Poll Reputation Quotient (RQ) study evaluates customer and other stakeholder perceptions of the 60 most visible companies in the country, across 20 attributes that are grouped into six dimensions of reputation:

Products & Services
Financial Performance
Workplace Environment
Social Responsibility
Vision & Leadership
Emotional Appeal
General Motors saw the greatest increase this past year among all 60 companies whose reputations are measured in the report, showing gains in every one of the six aforementioned dimensions of reputation.

Some other points of interest regarding GM’s social media – related initiatives:

GM’s FastLane blog began in 2001
GM sent out more than 1000 media releases last year
GM uses Google+ to distribute some of its news releases because of the ability to segment news releases according to blogger and media interests. Google+ also enables GM to add additional multimedia “color.”

AutoTrader.com will announce later today it has signed an agreement to acquire Kelley Blue Book and its properties CDM Data and CDM Dealer Services, Dealer Communications has learned.

In exclusive interviews with Dealer Communications and the Wall Street Journal, AutoTrader President and CEO Chip Perry and Kelley Blue Book President and CEO Paul Johnson talked about the background and the strategy for the deal.


It’s the second major acquisition for AutoTrader in a little over a month, which announced in September it was buying vAuto, a used vehicle inventory management tool for dealers.

Kelley Blue Book, which was founded in 1926, is one of the oldest and most well known brand names in the automotive industry. It had come close to being sold a few times the last several years, including in 2008 when an earlier deal between AutoTrader and Kelley fell apart at the finish line primarily due to the collapse of the credit markets.

Kelley Blue Book retained the services of J.P. Morgan in July to again explore the option of selling the company. “Sometimes things come down to timing,” Johnson says. “People in the industry see the future as brighter and there is a resurgence in the M&A (mergers and acquisitions) markets.”

Several firms expressed interest and submitted bids to acquire Kelley. "KBB is one of the most attractive properties in years (for sale)," says Perry, who described the competition to buy it as "competitive."


AutoTrader, whose majority owner is Cox Enterprises Inc., announced in May that Providence Equity Partners had acquired a 25% stake in the company. At the time, Perry said the investment would “enable us to pursue the many organic growth opportunities, as well as strategic acquisitions, that will help improve the products and services we offer our customers.”

Terms of the AutoTrader-Kelley deal are not being released. However, industry insiders estimate the deal was in the neighborhood of $550 - $600 million. The deal is expected to close by the end of the year.

Both Kelley Blue Book and vAuto will operate as subsidiaries of AutoTrader. Johnson and Dale Pollak, vAuto’s founder and chairman, will report to Perry.

Except for additional products and services it will receive from AutoTrader, Perry says “almost everything Kelley does now is not going to change.”

Perry says Kelley’s model will move to more of a classified subscription model that is used by AutoTrader.

The challenge for AutoTrader will be to maintain Kelley’s brand as being the unbiased source for vehicle information and valuations. The plan is to enhance the consumer experience on KBB.com by custom fitting several of AutoTrader’s products for the site.

For example, classified listing model will play a much bigger role on KBB.com. In addition, KBB.com will also get AutoTrader’s Trade-In Marketplace, which provides consumers with an instant price for their vehicle redeemable at auto dealerships across the country participating in the program.

Perry says the partnership will enable dealers to access the Kelley audience.

When asked whether AutoTrader’s buying spree was done, Perry said the company is always on the lookout for opportunities, but that most of its growth would be from products developed internally.